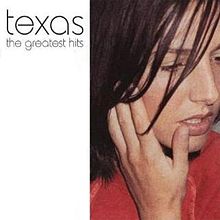 SOME WORDS, PHRASES AND CLAUSES ABOUT THIS RECORD: Texas has made zero dent here in the US. Many UK hit makers don’t (see the great Beautiful South). What doesn’t make sense is that this group makes music that is in no way outside the US mainstream in tone, direction or production. Yeah, it’s generic adult dance pop, but the lack of hits, even sales in the US is a mystery. In fact, some of their post-2000 records haven’t even been released here.

Spiteri has a nice voice and is effective in low or high registers. The music features decent dance beats and grooves, or on the slower numbers requisite lush production. You can put this on and not worry about offending anyone (except metalheads or indie purists). Just don’t expect anything out of the ordinary.

NOTES & MINUTIAE: Three things, since this is the only Texas album I’m reviewing and they are all interesting:

1. They recorded a verion of “Say What You Want” with the Wu-Tang Clan, and it’s on this collection as well.
2. McElhone, who is a co-founder, was a member of both Altered Images and Hipsway. So he had lots of pull with record companies when Texas was being formed.
3. McErlaine suffered a serious brain aneurysm at age 40, but has fully recovered.

IS THERE A DELUXE VERSION: In the UK and the EU, you get extra tracks. We didn’t here.

GRADE: B-: I think B or B- is my generic grade for generic sounding stuff that’s good enough to keep but I don’t have a tingle about or anything. That fits Texas to a T. Those that like dance pop should check this out.