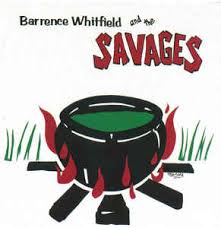 OTHER SONGS YOU MAY KNOW: Oh, no

WHAT’S IT ALL ABOUT: A throwback soul man hooks up with a group of affecionadoes from the Lyres and other Boston bands to create a hot R&B revue.

SOME WORDS, PHRASES AND CLAUSES ABOUT THIS RECORD: Barrence Whitfield was in college in Boston and working at a record store, when Peter Greenberg of the Lyres heard him singing in the store. Soon, Whitfield and Greenberg were working together with a group of Boston-based musicians. They dubbed the band “The Savages” which fit Whitfield’s raucous vocals.

Their first album is a stomper, with some obscure R&B covers from the 60’s and originals that fit right in like “Walking with Barrence” and “Ship Sailed at Six”. A cover of “Mama Get the Hammer” fits right in with its oddball and frenetic energy.

It’s a fun time with a fun band.

IS THERE A DELUXE VERSION: Yes, a re-issue packs 10 more cuts onto the package.

GRADE: A-: Just try not to move during this record.