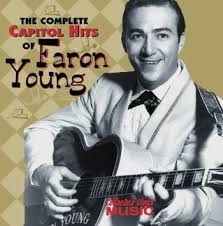 OTHER SONGS YOU MAY KNOW: You may know others – it’s packed with hits.

WHAT’S IT ALL ABOUT: All of the charted hits plus more for the first phase of Faron Young’s career, from 1954 through 1962, when he left for Mercury.

SOME WORDS, PHRASES AND CLAUSES ABOUT THIS RECORD: Faron Young was one of the pioneers of the honky tonk movement, and his songs about lovin’, drinkin’ and all that comes with it set a standard that others had a hard time to follow. He had a good voice, especially for his ballads, and dabbled in acting thanks to his looks.

He had a few crossover hits, such as his most famous song, “Hello Walls”. Written by Willie Nelson, Young’s interpretation was spot on and carried the song to its lofty rank in the pop charts, and gave Young a lot of leverage in his career.

After Capitol, Young had plenty of other hits (in a different collection). But his Capitol work was his most worthy and groundbreaking.

NOTES & MINUTIAE: He introduced Hank Williams to his future wife.

GRADE: A: A country legend like this shouldn’t be forgotten.