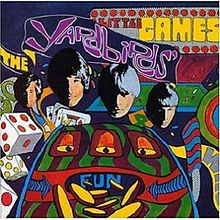 OTHER SONGS YOU MAY KNOW: Drinking Muddy Water

WHAT’S IT ALL ABOUT: They fired Jeff Beck but had Jimmy Page. They hired Mickey Most as producer. The latter was a big mistake and basically ended the band.

SOME WORDS, PHRASES AND CLAUSES ABOUT THIS RECORD: Mickey Most was a long-time producer in the UK and created some classic hit singles, but when he was brought together with the Yardbirds it was a mismatch.

The record company wanted hit singles, but the band had moved, on stage, to more of a blues-rock improvisational vibe, utilizing the strengths of Jimmy Page. They lost Paul Samwell-Smith, who was the musical director of the group, and that no doubt hurt them in the studio.

The singles (which only one appeared on the album) were by outside writers and not at all in the style of the band, and the other cuts were rushed through the entire process in just three days since Most thought albums were a waste. There’s not really much to recommend here, which is sad. The title track was OK, and a couple of tracks have good guitar and melodies, but it’s really short and incomplete.

NOTES & MINUTIAE: This wasn’t even released in the UK after the single “Little Games” stiffed.

GRADE: C-: Only a couple will escape the exiling. This is just a sad way for the Yardbirds to leave the stage.

TITLE:  Yardbirds (a/k/a Roger the Engineer) (UK); Over Under Sideways Down (US)

OTHER SONGS YOU MAY KNOW: Lost Woman, Jeff’s Boogie

WHAT’S IT ALL ABOUT: Only full album with Jeff Beck is a masterpiece of British blues rock, with explorations abounding and not much filler.

SOME WORDS, PHRASES AND CLAUSES ABOUT THIS RECORD: The blues is the basis of this, the 1966 classic album does have some almost straight blues cuts. Yet the guitar work of Jeff Beck, and the experimentation by the entire group, moves the band away from a straight blues band to one of the first acts outside the Beatles to mix the East and West.

Even the straight blues songs have a raga tint to them. Beck’s guitar also is punishing the songs, as you hear how overdriven the sound is on many tracks. A track like “Hot House of Omargarashid” may sound like psychedelic gibberish, but as the song builds the chants become a mantra, and Beck just shines over it.

The star of the album, and the star of the Yardbirds as a band, is the US title cut. “Over Under Sideways Down” sinewy guitar lines inspired countless other riffs, and the dramatic breaks of the song add to the tension. It was a shame that by the end of the next year the Yardbirds were disintegrating.

NOTES & MINUTIAE: The US version cut two tracks – seemingly at random. Also, in the UK it was a self titled album, officially, but known as Roger the Engineer after Chris Dreja’s cover drawing of the records engineer, Roger Cameron.

IS THERE A DELUXE VERSION: Yes, and the key track is “Happenings Ten Years Times Ago” (#30 US, #43 UK), a single almost on par with “Over Under Sideways Down” – the only track with both Jeff Beck and Jimmy Page on guitar for the Yardbirds.

GRADE: A+: The creativity on this album is staggering. The Yardbirds weren’t afraid to try anything.

TITLE:  Having a Rave Up with the Yardbirds

OTHER SONGS YOU MAY KNOW: Train Kept A-Rollin’

WHAT’S IT ALL ABOUT: US record company release combines UK singles with half of the great UK live album Five Live Yardbirds.

SOME WORDS, PHRASES AND CLAUSES ABOUT THIS RECORD: One half of the album contains the first recordings of the Yardbirds with Jeff Beck. They’re notable not only because Beck is on board, but they’re moving the band past the straight blues into other styles, some rooted in the blues, some not. All of the tracks on the studio side are excellent, and worth keeping.

The live side is redundant, though, for those of us who have the Five Live Yardbirds collection. Now, when this was released, in the US you got what you got, and you didn’t have that album yet. But the live cuts kind of mess with the flow of the record. But like their past US release, product was the name of the game.

The best thing to do, for you streamers and others, is to get the live album, and then pick the studio cuts here separately.

NOTES & MINUTIAE: This is the definitive version of “Train Kept A-Rollin’” that seemingly every other version is based on.

IS THERE A DELUXE VERSION: Yes, with extra cuts that are also on their next album or on other compilations.

GRADE: B: The studio side is great. But the redundancy of the live material makes it less essential.

TITLE: For Your Love
YEAR RELEASED: 1965
CHART ACTION: #96
SINGLES: I Wish You Would, Good Morning Little Schoolgirl (#44 UK), For Your Love (#6 US, #3 UK)
OTHER SONGS YOU MAY KNOW: A Certain Girl
LINEUP: Keith Relf, Chris Dreja, Paul Samwell-Smith, Jim McCarty, Eric Clapton on nine tracks, Jeff Beck on three.
WHAT’S IT ALL ABOUT: US record company takes advantage of great single, and arranges a US only album to coincide with a tour despite the fact Eric Clapton had left the band earlier in the year.

SOME WORDS, PHRASES AND CLAUSES ABOUT THIS RECORD: This is the bad thing about mid-60’s albums from British bands – they’re a mess in sequencing and continuity. Some of these tracks date back to early 1964. But Epic needed product because of “For Your Love”, and well, product is what they got.

“For Your Love” is a tremendous single and a great relic of the British invasion. Yeah, Clapton didn’t like it – he’s was a purist then you know – but it’s a hell of a record. About half of the cuts are decent covers of blues songs. There’s only one original from the band and it’s OK. Songwriting wasn’t their strength yet.

But some of the tracks aren’t great, and their cover of “My Girl Sloopy” just sits there and goes on way too long doing nothing really.

NOTES & MINUTIAE: Graham Gouldman wrote “For Your Love”, and later was in 10cc. I guess the relationship didn’t quite work out, because he later co-wrote “I’m Not in Love” for 10cc. (Hah, just kidding about the relationship part).

IS THERE A DELUXE VERSION: No – I had to put this together myself.

GRADE: C+: Half of this is good, but there’s no flow or continuity. Find the good stuff on compilations!

TITLE: Five Live Yardbirds
YEAR RELEASED: 1964
CHART ACTION: None, but the influence was staggering
SINGLES: None
OTHER SONGS YOU MAY KNOW: I’m a Man among others
LINEUP: Eric Clapton, Chris Dreja, Jim McCarty, Keith Relf, Paul Samwell-Smith.
WHAT’S IT ALL ABOUT: Live album by British blues acolytes help fan the flames of the blues-rock revival in the UK (and then the US)

SOME WORDS, PHRASES AND CLAUSES ABOUT THIS RECORD: Live albums from the early to mid 60’s are always going to have dodgy sound – that’s just the reality. Five Live Yardbirds does a pretty good job considering the limitations of the live recording equipment.

This record is a set of 10 blues and early rock covers by the Yardbirds – featuring Eric Clapton, of course. While there’s nothing groundbreaking about Clapton’s playing on this album, he does show the passion for the blues that he didn’t in some of his later work.

The sound does tend to wear on me for a full album, though. In pieces, though, it’s great.

NOTES & MINUTIAE: This was recorded at the famous Marquee Club in London in front of a great crowd of blues fanatics. Also, this was never released in the US until the late 80’s.

IS THERE A DELUXE VERSION: Yes. A version exists with their 1964, early 1965 studio cuts, many of which appeared on their first two US releases. The Yardbirds discography is kind of a mess – streaming and on CD.

GRADE: B+: Some great energy and great playing. The sound is the best it can be.